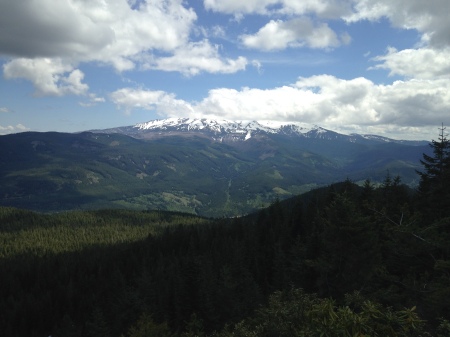 We did not mean to end up at Lost Lake. We didn’t have directions to get there. We didn’t know anything about the hike. We were headed elsewhere and we got tired of driving. After some discussion, it became clear we were going to Lost Lake. Neither of us had ever been there (except maybe as small children but we didn’t remember it). Before we lost phone service, my sister quickly got us some directions, a place to park and an excellent little hike.

The hike is a short 4.6 miles with 1270 feet of elevation. We were hoping for something longer today, since it was so beautiful, but sometimes you take what you can get. It was actually quite the butt-kicker, so in the end, it worked out. We parked just outside the main entrance to the campground and hit an old trail that connected us up with the butte trail without us actually having to enter the park and pay the fee.

This connector trail, the Old Skyline Trail, was around before the PCT. When my sister was reading the directions, she kept reading that part, which was absolutely not important and quite annoying, over and over and over again. So….just in case you wanted to know, “Before the Pacific Crest Trail (PCT) was constructed in the 1960s, the Oregon Skyline Trail traversed the crest of the Cascades, with remnants like this one bypassed by the new PCT.” I told her if she said it one more time I was going to punch her in the throat. She, of course, read it again. I did not punch her in the throat. Empty threats.

The Old Skyline Trail was mostly flat. It really just lead up to the actual trail. You are surrounded on all sides by giant rhododenderon bushes. They were fragrant and just past blooming, but the bees were out in full force. I have a pretty extreme bee phobia. I’m actually afraid of most things. Life is quite terrifying for me. But bees, they really are one of my biggest fears. They were humming and circling us through this entire flat portion. I was definitely on edge. One landed on my face. I don’t know what happened. I couldn’t remember. I can’t remember now. Somehow, as I reacted to it touching me, I went from standing on a perfectly good trail to upside down ON a rohodenderon bush about five feet off of the trail. I couldn’t even get up. My sister had to pull me out of it. I wish it was on camera, because I honestly don’t know what happened. Good thing we weren’t hiking Eagle Creek or something else with a shear ledge. Geez, talk about over-reaction, am I right?

The hike was entirely uphill. I have said this before, but I was exaggerating. It’s what I do. I am not exaggerating this time. It was not super steep, except in some parts, but it was literally every single step of the whole 2+ miles uphill. At the very top there was this flat section for about 15 feet, then it went uphill again. We definitely struggled up it and as usual on the big uphills, my sister was really far in front of me. It was a solitary hike for the entire uphill. We saw one other group and we weren’t together…lots of introspection 🙂

When we made it to the bluff, it was all worth it. The view of majestic Mt. Hood was incredible. I can’t even explain it and the photo in no way does it justice. We just stood in awe for several minutes. After we had our fill, we headed back down and meandered through the campground so that we could actually get a glimpse of the lake. There were several trails with “switchbacks.” We got very frustrated and just started tromping through the woods. The whole point of switchbacks is to negate elevation. You can’t just randomly create winding flat trails and force people to walk extra distance when all they want is to see the damn lake. Well, I guess you can, but you can’t expect people to stick to them. We practiced very bad trail stewardship. When we arrived lake side, it did not disappoint. I highly recommend a trip to Lost Lake.