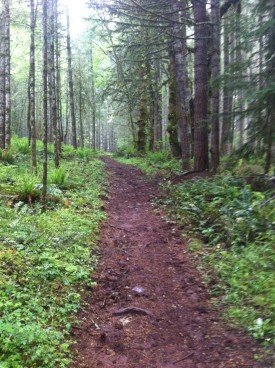 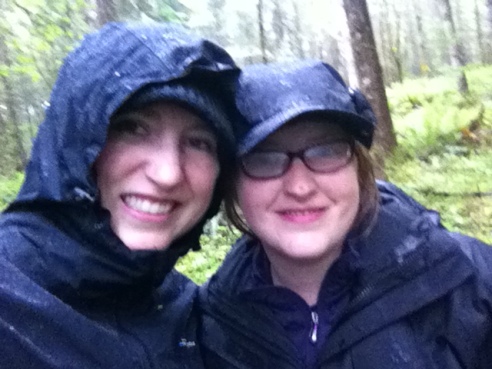 This hike was fraught with difficulty. We basically just laughed all day at the frustration. On Instagram, I call our hikes misadventures. They definitely are.

I woke up super early, for me, and started eating breakfast. My sister, who generally sleeps several hours later than me, called me at 9:15 to see if I was up. “Early start!” is what I thought immediately. I was super excited for an early start because honestly I had a lot of work to do after the hike. I geared up and headed to her house. That is where the insanity began.

My sister’s apartment was entirely surrounded by the Rock n’ Roll half marathon. The route literally circled her place. I could NOT get to it. I left my house at 9:45. It usually takes me 15 minutes to get there. I arrived at 11. I finally was able to use I5 to get to her. If you see a map of where we both live, you will understand how ridiculous that is. Finally…we were on the way.

We were headed toward Molalla, to the Molalla River Recreation Area which is maintained by the Bureau of Land Management. The feds know what they are doing. The whole area is well-maintained, well-signed, and just fancier than what we are are used to. But all of that happened after we got there. We were not there yet.

We stopped in Woodburn to get Subway. We needed to eat before the hike since we got such a late start. The Subway where we stopped had one employee and apparently every person in the town of Woodburn wanted Subway that day. We were there for about 45 minutes. It was so silly we just laughed and laughed.

Ok, so now we were headed to the trailhead. I did not look closely at how far it was. When we finally entered the Recreation Area, there was a sign that said 19 miles. We both groaned…and, my gas light came on. I started doing the math – 40ish miles just to get back to here. We were going to run out of gas.

We proceeded anyway because my middle name is Danger. Then, we couldn’t find it. We drove and drove and drove and drove looking  for that damn trail head. We were headed to the Table Rock Hike. We never made it. We got discouraged, and scared, and worried about gas, and we headed back to the trailhead that we had already passed. We had no information about the hike and no service on our phones to look anything up. We just needed to get out of the car before we lost our minds.

There were maps at the trailhead?!!! It was awesome. There were a million options for trails. We just kind of decided as we hit intersections and tried to keep track of where we were headed so we could get back. It started to rain. We stopped and put our coats on. It started to pour. We stopped and put our rain pants on. When we stopped we saw the first of three crazy huge ant hills. They were seriously like a horror movie. I got too close to one and they attacked my shoes. Scary.

We probably hiked 4 miles. I have no idea about the elevation. Despite the rain, it was a lovely hike. It reminded me of home. The fields that we walked through looked just like the fields in front of my parents’ house that I spent my entire childhood in.  The trees that were down over one section, my sister decided, “Gave us an extra workout.” It was the best signed trail we have ever hiked. We knew exactly where we were the whole time. It’s odd to me that that Huckleberry Trail contains exactly zero Huckleberry plants though. Where did the name come from?