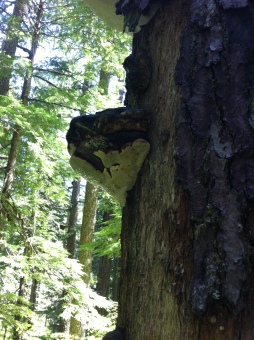 Larch Mountain is closed for the winter and spring. Due to a tiny amount of snowfall this year, it opened last week. We were so excited. We’ve been wanting to hike it for awhile. There are a lot of options up to and around Larch Mountain. We decided to check out the loop hike. You start at the top and hike down into the crater. Then you circle around and climb back out on another path. My sister is adamantly opposed to any climbing on the second half of a hike. Needless to say, she was not amused by our particular route.

As we headed down into the crater, there were a lot of people coming back out. They had pick axes and shovels and were obviously creating some drainage and doing other trail maintenance. It occurred to us that since we use so many trails each year, we should probably join a trail maintenance team. Maybe we will. Maybe we will continue to be lazy.

The first half of the hike, down the hill, was really a well-maintained trail. It was beautiful and green and sunny. We were really enjoying ourselves but also terrified about how much elevation we were losing. We were scared to have to climb back out. The entire hike is 5.9 miles and 1310 feet in elevation change. Eventually we made it to a really bouncy and not-safe-feeling bridge and were then officially on the uphill portion of the hike.

The trail wasn’t entirely uphill, in fact, it was a pretty easy grade most of the way back up. The only problem was the condition of the trail. It was really precarious. There were roots and rocks everywhere. At certain long portions of the trail we were worried we had actually stumbled off of the trail and into a dry creek bed. That is what it more resembled than a trail. There were beautiful fungi everywhere and flowers we had never seen before. There were also abundant “baby ferns” as my sister decided they were called. It was the perfect temperature for a hike and despite that we only saw two other groups of people. We are really dreading when the summer hikers are all out. We’ve become accustomed to having the trails to ourselves over these last few months.

On the last two hikes we got very lost and very frustrated trying to even get to the trail heads. A repercussion of those experiences is that now we are extremely cautious about the direction in which we are heading and checking directions frequently. Twice on our way to this hike we stopped to check directions and make sure we were on the right track. Both times we were able to determine that we were on the right track, we started going again, and then literally found the turn we were looking for around the next corner. It was silly.

Nothing really magical or hilarious happened on this hike. I can’t even think of a single anecdote to share. We definitely wished that it didn’t end with 3/10 of a mile on the road as the route to get back to the car. That is a terrible way to end a beautiful hike.  We are almost done with this 52 hike journey. I can’t even believe it. In just a few short weeks we will have hiked every single weekend for a whole year. That’s pretty incredible when you think about it. We have laughed more than we have cried. That’s all you can really ask for.

For information about the Larch Mountain Loop click here.