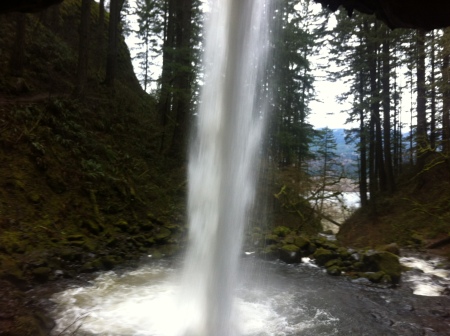 My sister has to work on Sunday again and apparently every Sunday for the foreseeable future. I guess when you politely explain to your scheduling manager that you have had Sunday off for 5 years, what she hears is that you want to work every Sunday for the rest of your life and have split days off. Hmmmm.

So, on Wednesday, we headed to the Oneonta trail head in search of Triple Falls. Both Jeremy Wedell and SteveZ told me it was a great hike and worth seeing so I wanted to see it. We had our second tag-a-long. Woohoo! My sister, the one and only, amazing Luke Strecker, and I hit the trail in the late afternoon. I didn’t have directions with me. I usually bring them, but this time I did not. So stupid. The trails in the gorge are so poorly marked it’s ridiculous. They are marked, periodically, but the markings make little to no sense. It might as well say red, green, and blue with arrows. No wonder so many people get lost in the gorge.

We headed up some beautiful switchbacks into the forest. It was raining, but not hard. Much like Lacey, Luke is a fabulous photographer, so we have lots of photos documenting the gorgeous scenery. I even brought my umbrella to keep his camera dry. It had never been opened before. Oregonians don’t use umbrellas. I bought it when I went to New Orleans.

We reached our first trail split and it had a  number of signs with arrows. None of them said Triple Falls, of course. We headed toward Horsetail Falls. We reached the falls and crossed a bridge that had a printed, wet, held-down-by-a-rock paper that basically said, “This bridge is falling down. Only one person at a time should cross it.” Totally safe.

After we crossed the bridge and scoped out Horsetail Falls, we headed up some switchbacks toward Ponytail Falls. Ponytail Falls is one of the neato falls that you can walk behind. My sister and I decided it would be the perfect place to live in the event of a zombie apocalypse. We even picked out where our tents would go and the defenses that would be required to survive. Dibs.

After quite a bit more distance in that direction we realized we were hiking to nowhere and turned around. By the time we got back to the trail junction that would actually take us to Triple Falls, it was dark and we headed back to the car instead. My sister has this really irrational fear of getting stuck in the dark, so I try to appease her. Plus, I can go back there another day and see it 🙂

My knee is still pretty messed up from falling last week. As we headed back down the steep switchbacks, my sister and Luke were a mile ahead of me. Either Luke makes her go faster or I’m really really slow with this knee injury. I also suppose it could be a combination of the two. It was a lovely rainy day in the gorge and the falls and forests were beautiful.