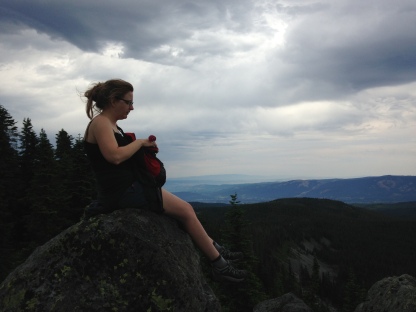 We got an early start. We left my house at 8am. We stopped at Fred Meyer for snacks and headed east. We drove FOREVER. Then we finally reached the trail head. It didn’t seem like an entirely horrible drive because of good company and excellent music. I just really wanted to be out of the car. It’s not a long hike, 6.5 miles with 1000 feet of elevation, but there is a lot of bang for your buck. From the parking lot, you head up, but it’s only a slight incline. At the map, you go left from the actual Vista Ridge trail to a newly restored old Vista Ridge Trail.

As you climb there are some beautiful viewpoints of majestic Mt. Hood. We stopped several times to check it out. Then the attack began. I can’t even begin to describe the attack. It’s especially hard to talk about right at this minute since I am currently suffering the unbearable consequences. I’m not really sure if we even noticed when the swarm arrived. It was one bite. Then another. We swatted them away and prattled on. Then there was a realization. An infinite amount of mosquitoes were destroying us. My sister had bug spray on and still got a couple of bites. Alex and I did not. Between us, I would estimate we have around 7,000 mosquito bites. They are EVERYWHERE. Both of us started to develop gigantic lumps covering every inch of exposed skin. For whatever reason, they were particularly keen on our shoulders. So so so many mosquitoes.

Eventually we reached a beautiful, flat marshy area. That seemed to be their origin. We wanted to stop and take in the sites, but it wasn’t possible. We had to get away. It was difficult to keep from running. We did walk very fast though. Eventually we reached the summit of our hike and at that point there was wind. Wind means fewer mosquitoes. They definitely weren’t gone, but they were bearable at least. We started to descend toward Perry Lake and the number of blood-suckers went drastically up. I wanted to keep going but Jessie and Alex were not having it. We headed back the way we came, about a half mile from our planned final destination, and walked on a spur trail to Owl Point. Owl Point was incredible. We had lake views and mountain views and sat atop a scree field drinking water and eating our various snacks. It was incredible. There is a geocache there. We added to the journal. I warned of the mosquitoes, but by the time the poor bastards read it, it will be too late.

After our brief respite, we headed back down with mixed emotions. We  knew we had to go back through the dreaded marsh. On cue, they started to descend upon us. It was too much for Alex. He put on my rain coat despite the rising temperatures. I think it probably saved him. They really thought he was delicious. It was really bad, but eventually they thinned out at least, and we did make it back to Sid and the safety of “indoors.” My sister killed a mosquito in the car.

Our discussion today, as usual, was of many things: Alex’s trip to the Grand Canyon with his family, our three remaining hikes, and Jessie’s engagement! Yep, that happened. On Saturday night, in front of his family and ours, Sharock asked Jessie to marry him. It was lovely. I get a new brother-in-law. Very cool.

There are a lot of hikes from the Vista Ridge trail head. I would like to do more. I will never hike without bug repellent again.

For information about Vista Ridge to Perry Lake click here.