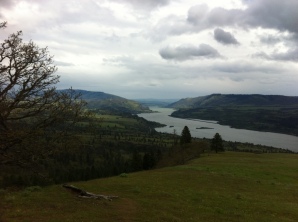 In all of the “must see” hike lists I’ve read, Coyote Wall is right up  there. I have been waiting for spring. The wildflowers were supposed to be epic. They did not disappoint. We have not done a hike with a lot of elevation in a really long time. We were ready to really challenge ourselves. We did not, however, realize how much of a challenge this particular hike would be. It kicked out butts. But, we vanquished it because…well, frankly, we’re awesome.

Coyote Wall is supposed to have two loops, a long loop and a short loop, but we read in a couple places that both loops were no longer passable, so when I saw the hike from the Catherine Creek Trail Head, I figured it would be perfect. It’s a pretty long drive from home. You take the Hood River Bridge across to Washington and then head east through Bingen to Old Highway 8. There were TONS of cars at the trail head. That gives me mixed emotions. I hate most people, but I also like the idea that people are out getting exercise in the fresh air. It rained very hard all the way to the trail head. As soon as we got out of the car, it stopped raining. We stayed dry the whole hike. As soon as we got back to the car it started pouring. The hiking gods were on our side today 🙂

The hike could not have been more beautiful. It was definitely in my top five. We headed toward Catherine Creek and then took the trail west. The trail west is straight up. It’s about a mile and a half and it climbs a little over 1000 feet. It’s a wide road, made for four wheelers, but it was still really hard. We stopped many many times. But, there were six 18 or so year old dudes behind us, as my sister kept saying, “in the prime of their life” who never caught us. In summary, even though we stopped we’re faster and better than those young-ins.

When we finally stopped climbing, we were at a beautiful vista that was the first of many amazing gorge views. The trail crossed a field full of multi-colored wildflowers. There were several trails branching off in all directions. None of them had any markings, of course, because even the Washington side of the gorge is impossible to negotiate unless you already know where you are going. The trail across the field was very thin, made for mountain bikes, and we did see a few. It would be really fun to ride. Then we crossed several creeks and made our way through the one non-arid area which had moss growing all over it. We emerged onto another grassy field, another view, and some truly amazing trees, including – I swear- the whomping willow. It was terrifying.

We tried to follow the directions we had, but they were so vague and there were so many trails that we did get a little lost. Eventually we made it to Coyote Wall, but not until after doing some extra descending, which of course lead to more ascending on the way back. The hike is 8.2 miles and 1750 feet in elevation change. We got back to Sid in just shy of four hours.

All the way down the hill we wanted sparkling water so bad it was all we could talk about. I drank most of my water on the way to Hood River and we ran out as we hit the summit on the way back. At work, everyone drinks sparkling soda with a little flavor (the best is from Safeway). We call it Kanable soda because it was the-one-and-only Josh Kanable who started the trend. My sister calls it “fizzy bubbla.” That is way weirder than Kanable soda. We were talking about all the flavors we like. We often talk about food on our hikes. We decided on mandarin as our favorite. It tastes like Orange Crush. It’s delicious. You should try it.

When we were lost we kept saying that every rock we saw was Coyote Wall. All-told we saw Coyote Wall 13 times. Yay!