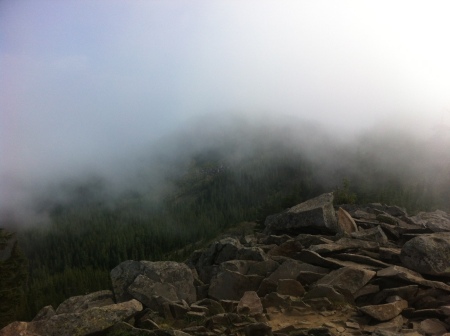 Well, we are getting tough. It’s official. We set out on this hike today because my friend and coworker, Rich, and his family did it over the summer. I saw their pics on Instagram and it looked pretty. When we looked it up, the hike seemed right up our alley. It is a 6.4 mile hike with 1600 feet of elevation gain. After last week, everything seemed easy in comparison. Rich warned me that it’s pretty much up one way and down another. It was weird though. We didn’t even feel very tired. We barely stopped at all. We hiked right up…and it was incredible.

Ever since I was a little kid going to Skibowl with my dad, I always wanted to know what was across that little bridge off of highway 26 where all the cars were always parked. Seriously, I’ve always wanted to walk across that stupid little bridge. Today my dreams came true. We bought a year-long recreation pass in Welches. We have paid each time for parking which is stupid. It will last until September 2014. There is no way we are quitting at 52. We just guarantee 52. We used a pretty gross outhouse (use the bathroom in Welches) and then walked across my dream bridge. It was totally all that I imagined.

Mt. Hood was completely socked in with fog. It was thick, whispy, amazing fog. We loved it. The trail was well maintained and obviously highly used, at least up until Mirror Lake. There was a slight incline all the way up to the lake with several switchbacks but it was pleasant. We talked most of the way up which means we weren’t totally winded. We saw a lot of people on the way back down, despite getting an early start, and figured they were just doing the short Mirror Lake portion. We finally reached what appeared to be the top, but there was no lake. It was a sea of fog. We assumed the lake was in there somewhere. We walked down some stairs to make sure and indeed we found water. I have seen a lot of pictures of mirror lake, but I had never seen it. I still haven’t, but I’m okay with that.

We headed up the trail toward Tom, Dick, and Harry Mountain. It was a thin path with a lot of rocks and roots. My sister and I are clumsy. We trip quite frequently and today was no exception. I did break my toe when I fell on the way down Hamilton. It is still purple and swollen. Sharock Bruce Hannah, Esq. bought me brand-new hiking boots because he couldn’t stand to see me hike in my tennis shoes any longer. On our way up we passed six people. That’s it. The cold weather was awesome. Everyone who passed us said it cleared up on top and majestic Mt. Hood was beautiful. We were super excited. We passed a huge pile of rocks. I decided it was Rockbiter’s lunch. Now I want to watch Neverending Story, really bad. We headed into an obvious burn area. The new life growing around the burned trees was so beautiful, circle of life and all that. The trail got steep and rocky but we could see blue sky so we knew we were close. We crested the hill and the fog had followed us. Mt. Hood was entirely obscured. I honestly don’t care. The fog and the way the wind was blowing it across the mountaintop was so amazing. We had never seen anything like it. We settled in on big rocks for our Subway and enjoyed the wildlife; some chipmunks wanted to share with us. We do not share.

The walk back down was awesome. Downhill is always awesome.  My sister noticed that her left hand was blue about halfway down the trail. We decided that it was either from her new jeans or that she was dying. We both hoped that she wasn’t dying, but you never know. It’s hours later and she’s on the couch next to me drinking a nice pinot noir, so I assume it was just the jeans. We worked on some prancercizing on the way down. We’re pretty sure it upped our fitness an incredible amount. We’re going to add it to our repertoire.

For information about Tom, Dick, and Harry click here.